‘I Am Britain – Now So Can We!’: extracts from the unauthorised autobiography of Nigel Farage

“Shut up, I explained” – Nigel Farage during the EU referendum of 2016

On his personal upbringing

“Unlike liberal elites, who grew up on prestigious council estates – and were educated at exclusive secondary moderns; my own beginnings on life’s journey were far more modest.

I was raised in the humble confines of Dulwich prepper; and didn’t even inherit the old slush fund until the age of 21.

And yet, after graduation, I went on to prove that it is perfectly possible to succeed in life; without any hardwork or talent being necessary, in the slightest. All one needs is the right kind of moxy” (p. 2).

On his reason for entering politics

“Unlike the rest of the world, Britain is a normal country. And I intend to see it kept that way” (p. 43).

On religion, and Britain being a Christian nation

“I am not a religious man, but my wife is. According to her, God supports Brexit – and favours British safety standards – as much as the next fair-minded chap” (p. 36). 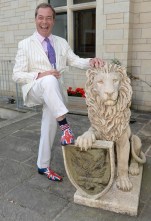 The seven-time Parliamentary contest runner-up turned heads with an elegant ensemble from the 1850’s.

On relations with President Trump

“People can say what they like, but Donald Trump has achieved as much in the first 3 years of his presidency as most US presidents could only manage in the first 3 weeks of theirs” (p. 67).

On the importance of freedom

“Tax avoidance is an expression of basic British liberty. In fact, pay cheques should come with a tick-box option: would you like to pay taxes on your income – Yes/No” (p. 19).

“I don’t know what ‘xenophobia’ means – but it sounds suspiciously like unwholesome foreign nonsense, if you ask me” (p. 11).

“You can’t even make derogatory generalisations about entire ethnic groups without being called ‘racist’, these days” (p. 56).

“I, for one, have had just about enough of this, quite frankly. Islamophobia is an imaginary concept, invented by Muslims who want to ban Christmas; then impose compulsory Sharia Winterval safe-spaces, and women-only swimming sessions, on the stouthearted yeoman of this once proud land” (p. 57).

“and right away, you’ve got them by the jaffas” – Farage explaining the art of public speaking, in 2017.

On Europe and sexual politics

“The Channel Tunnel must be narrowed by 3 inches, forthwith: allowing sleek British trains to enter Europe; but excluding the unwholesome foreign-variety of carriage from gaining entry to our country.

And I’m not sure why feminists complain about so-called ‘man-spreading’ – it’s
the way we’ve been sitting on public transport for millions of years” (p. 17).

On law and order

“No one abhors the overbearing machinations of the nanny state more than I; but this is one area where a clampdown is, frankly, long overdue. It really is high-time that crime was made illegal.

If anything we need more laws – and stiffer penalties for breaking them.” (p. 75)

On what’s wrong with modern Britain

“I don’t know what a ‘selfie stick’ is, and quite frankly I do not want to know. If anything this whole phenomenon merely serves to show everything that is wrong with our country, these days” (p. 97).

“If what I hear on the doorstep is anything to go by, then at least four quarters of all Britons support Brexit; and the remaining third are likely to be sympathetic to the cause – only too afraid to say so in polite company” (p. 18).

“Sadly, London is no longer the country that I grew up in. One need only cast the most cursory of glances around to work out why Brexit was embraced by the Great British public.

This is perhaps why an overwhelming 4% majority of people voted to leave the EU – so that sanity might be restored to these isles, once again”  (p. 22).

On the BBC’s left-wing bias

“I stopped watching Match of the Day a long time ago; but I will stop watching it even more now” (p. 432).

Farage was unable to gain a single appearance on the BBC throughout the entirety of one Thursday afternoon, in April 2019.

On the Single Market

“What we have gained in trade, we have lost in freedom. This is reflected in the fact that well over five fifths of all British laws are now made in Brussels” (p. 78).

“Republicanism is contrary to the natural order of things. It is the animal kingdom, after all – not the animal worker’s republic” (p. 70).

On his new Brexit party

On briefly sporting a moustache

“On the whole, the moustache has peaceful, welcoming connotations. The beard, by way of contrast, seems to suggest arms trader, or sugar-daddy – possibly even a professional librarian” (p. 65). 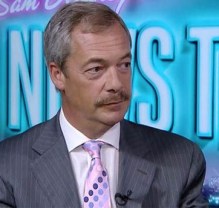 It may surprise you, but this is actually Nigel Farage – a master of disguise, as well as British statecraft.

On people making fun of his moustache

“I am not deficient in an appreciation of the humorous, but I confess that I fail to detect anything akin to pleasantry in the outrage” (p. 66).

On people favouring experts and expertise over Brexperts and Brexpertise

“A most singular and distressing occurrence. No man has ever wanted to see women in a state of undress” (p. 45).

On the short-comings of modern satire

“Someone should jolly well restore comedy to rights – with time-tested jokes about the frivolity of women; and the exotic customs of foreigners.

An unwillingness to plow this comedic furrow is likely to be the very reason why Britain has been little more than a full-blown communist state, since 1979” (p. 11). 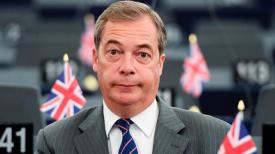 A little something called patriotism

“I once read something or another on the internet about the history of Roman Britain. So far as I could make out, the fall of Rome’s Empire was due to two things:

1) a lack of proper border controls.

On a post-Brexit trade deal with America

“We will get to enjoy the very cheapest produce that chemicals, hormones, genetic patenting, and intensive living conditions – for both animals and workers – can possibly provide. Britain will be a paradise on earth” (p. 26).

On his own political legacy

“Everything I had been saying about the EU for years – whether it happened to be true or not – has now become mainstream politics. And with such luminaries as the current government at our nation’s helm, the sky is Britain’s oyster” (p. 356).

“I have sold Brexits to Brockway, Ogdenville, and North Haverbrook: it put them on the map” – Farage on the campaign trail.

“When we leave the EU, we can revoke India’s independence, take back control of the Suez canal; and write stiff letters to our various former colonies in Africa.

Tell them to stop this messing about – stop this self-governing hankypanky – and pull their socks up; then report back for Empire, promptly, at 7 AM the very first morning after Brexit.

Get the world back to the way it ought to be, I say; make it all ship-shape and British once again – then everything will be just fine” (p. 98).

On his career in politics

“Unlike careerist politicians, who merely turn up at Parliament for the sake of money, I hardly ever attend at all.

Admittedly, certain discrepancies in my personal expenses-claims have arisen, on occasion. But I think that allowances should be made, until such a time as patriotism becomes tax-deductible” (p. 178). 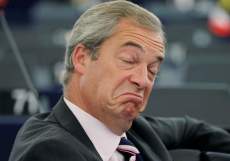 Action shot of Farage hard at work in the European Parliament.

Source for all photos: internet.