Will You Sponsor A Men’s Rights Activist?

Since feminism began to make modest and incremental gains during the 19th century, the world has been turned upside down for some men.

While most adult males have been completely unaffected by this turn of events, with many only too glad to see the horizon of equality draw near – believing this to be of mutual benefit to both sexes – for some men, the consequences have been simply devastating.

Such men now find themselves driven to fight for their rights, as men, to be men – with men – via the internet, on a daily basis. 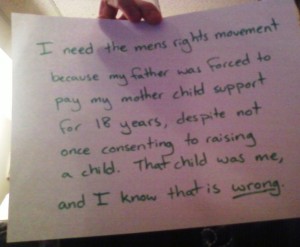 Their stories make for heart-breaking reading (names have been changed, to protect fragile senses of masculinity):

When Milo asks his wife to iron his shirt, she no longer reaches for the ironing board. Instead, she simply replies ‘You’re a grown man – you’re perfectly capable of doing these things for yourself, you know’.

When Eric returns home from work, he won’t find his tea already prepared and waiting for him. His wife say’s she’s ‘been at work all day, too’; meaning he has to make his own meals now – and learn how to use a can-opener.

Whenever Paul complains that his laundry still hasn’t been washed for him, despite putting it in the clothes-basket a week ago, his partner merely declares ‘Your clothes won’t make it through the washing machine on their own – you have to actually put them in’.

And should Tim ever ask his girlfriend to make him a sandwich, she no longer even looks at him – but points to the kitchen silently instead.

As many as one man in every thousand will have experienced situations like these.

Will you not help them?

For just £3 a month you can sponsor one of these men to join the Men’s Rights Movement. Your generous donation will help us to turn their lives around, and give them a second chance at manhood. 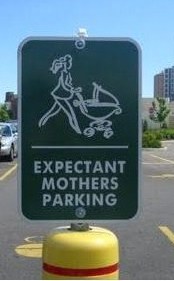 Once trained in men’s rights activism, a man will have the confidence, and skills, to make a real difference to the lives of other men.

When a columnist publishes an article about the vastly disproportionate impact a social problem has upon women, a Men’s Rights Activist will ask unstintingly ‘what about men?’

Whenever somebody discussing gendered social-problems says ‘this is because men…’ a Men’s Rights Activist will interject ‘not all men!’

Where there is a commentary, of any length, on any forum, in any time-zone, about the adverse consequences sexism can have for many women, a Men’s Rights Activist will cry ‘not only women!’

History is dominated by male practitioners; who have clearly internalised misandry!

Your donation can make a real difference.

To sponsor a men’s rights activist, please give £3 a month – or as much as you can – to WhatAboutMen.org