A Guide To DWP Euphemisms 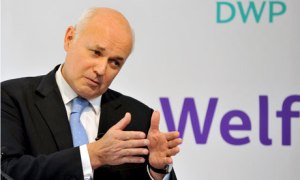 “I love you this much”

‘Creating a system based on fairness’ – ignoring need, in favour of targets.

‘Fit to work’ – somebody suffering from an incapacitating condition, whose heart still beats.

‘Tough but fair’ – punitive and arbitrary.

‘Scrounger’ – somebody who is poor.

‘Skiver’ – somebody who is temporarily too ill to work, and therefore in receipt of statutory sick pay.

‘An inconvenience’ – a person who has committed suicide.

‘Delivering change’ – encouraging people to protect their own interests at the expense of a scapegoated minority.

‘Making the welfare state fair to both the people who use it and the taxpayers who pay for it’ – making legislative protections more precarious.

‘Successful court outcome’ – a court case which has been lost by the government.

‘The taxpayer’ – (I) HM Treasury. (II) A figment of political imagination, which functions as a touchstone to justify policies. (III) Somebody who begrudgingly contributes the bare minimum to society, and vociferates a vein of parsimonious condescension via the pages of tabloid publications; while simultaneously bemoaning others for lacking a sense of societal obligation or modesty.

‘Spiralled out of control’ – the level of social security expenditure has risen in tandem with the level of economic difficulty.

‘Lifestyle choice’ – an impoverishing set of circumstances beyond anybody’s control, such as severe illness, or providing full-time care to relatives.

‘Something for nothing culture’ – a social security system in which support is based on need, and receipt is subject to strict conditions.

‘Ending the Something for nothing culture’ – exploiting public miscomprehension about the benefit system in order to encourage resentment, and subsequently diminish aspects of the social security system, so that it no longer protects anybody from being left impoverished – whether those currently in need of its protections, or those who will require them in the future.

‘Off benefits and into work’ – sanctioned.

‘Trapped on benefits’ – provided with a limited degree of financial support, on the basis of circumstantial need.

‘Capping benefits at a fair rate’ – eroding the financial resilience of the poorest families.

‘Simplifying the system of support’ – undermining the range of support available to people.

‘Targeting support to those who need it most’ – taking support away from people with complex, fluctuating disabilities.

‘Improving work incentives’ – pushing people who are unemployed into such a depth of poverty that even in-work poverty is a step-up.

‘Positive behavioural effects’ – encouraging people who are poor to regard social security with the same level of snobbery and disdain as wealthy people are liable to, until they support its dismantlement likewise.