An Atos report declared that a severely disabled woman, Ruth Amin, was capable of work, and should begin seeking employment within the following 12 months. Despite requiring constant one-to-one care, having no concept of danger, and needing to attend life skills classes in order to learn “practical things like how to make a sandwich or a cup of tea”, Amin was referred to the Work Related Activity Group, and mandated to begin preperations for securing employment. Hundreds of thousands of former claimants of incapacity benefit have had the same experience during the last three years. Amin’s assessment report contained a number of glaring errors – including classifying her as male.

Mencap consider Amin’s case to be one of the less extreme examples:

“The evidence we’ve seen suggests an assessment process that isn’t working for lots of people with a learning disability. An assessment designed to determine a person’s ‘fitness for work’ needs to take into account the realities of the barriers experienced by disabled people in getting a job – things like job availability, the prejudices of employers, the support people need to overcome the barriers they face. The assessment in its current form just doesn’t do that.”

By contrast to disabled people being denied financial support, and being treated so poorly, ATOS are set to make £40 million profit from its assessments of the disabled. According to the Daily Record, these figures were unwittingly brought to light by a DWP report, which had not been censored properly:

Titled “Atos Risk Management Plan”, the dossier shows a predicted £40,535,679 profit from the £206million Atos contract for Scotland and northern England. That would pay the disability living allowance of 10,851 people for a year, based on the average weekly payment of £71.84. Atos will collect the colossal sum if they manage to put 15 per cent more people through their tests than broadly expected.

The Daily Record article contains a number of first-hand accounts of people subject to assessments, and declared fit for work. For other accounts, see the Guardian’s letter page ‘Terrible Human Cost Of Benefit Cuts’.  The Guardian also have a video of Ruth Amin’s mother, Cecilila, discussing her daughter’s assessment by ATOS. For another article about ATOS £40 million profit, see ‘Campaigners’ fury as controversial disability test company Atos set to land huge £40m profit’ by The Mirror.

For an example of how the government censors data relating to ATOS’ cash-flow, see: ATOS Financial Risk Management, published in blacked-out form by the UK Parliament. 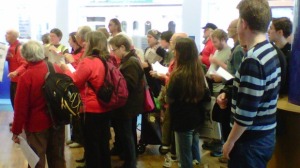 A protest has been held in Cardiff against links between the Cooperative Bank and ATOS – the company that carries out Work Capability Tests for the Department of Work and Pensions.

It’s not reported in the news, but this protest was organised by DPAC Caerdydd, whose Twitter page can be found here. For more on the event, see ‘Memorial Service To The Co-Op’s Lost Ethical Values’ on Facebook.